are you can't update this games

I'm lovin' it so far! The only thing missing for me is achievements.

Edit: Just finished it. It's great!

great game and reminds me of swarm simulator

How do I join the early access on steam?

Somewhy just found this game and it hooked me :D

Keep on going this road and the game might become very popular, will try your new version on steam if i'll have chance.

if you keep on updating it, then at some point i belive  it will be a masterpeice

This is one of the most underrated, highest potential idle games I've played in the past 3 years. Love it. It would have been really successful on Kongregate. Is there a discord server for this game?

Fun game, I like the interplay. One thing I miss from swarmsim and maybe more from super infinite spreadsheets is the fractional-spending interactions, where there you could find a complicated rhythm of hw much to hold back when spending for upgrades that hit a sweet spot of boosting future growth without choking off the lower-level present progress. Here it's either one-at-a-time or all-at-once, there's no way to strike a balance.

One feature I might ask that past a certain number of resets, lower-tier imps start to become automated. It gets to a point where you have to click the upgrade button a whole whole lot, and on top of that, the game usually feels like it can make some measure of progress while I'm AFK, except right after a demon reset when I have to sit there and do a bunch of upgrades for like fifteen minutes or else production is just massively underpowered till I get around to it.

But didn't the update do that? I thought you start with 1 of the type that was boosted.

Hmmm. I must have missed something. But I don't know how to reach that 1T Raw mana without a veeeery slow grinding.
I have 2500 WormA, I don't see any other ways to raise the number without a loooong wait.

You may have already figured this out by now, but the main way to get a lot of waste is by using energy abilities. With 10K you can get a Worm B and start to make them back. That's still pretty slow, but it's doable.

But it means a few days watching underworld, doesn't it ? It is very different from the initial pace.

I found that making sure to spend energy while doing other stuff worked out pretty well. You never reach a point where the game grinds to a halt due to lack of raw mana. But it's understandable if that feels kind of slow. I would guess that in future versions there will be other ways to get waste, because right now getting a Worm C is basically impossible.

Noticed a minor bug: when you sacrifice Souls, Raw Mana production is hidden until you buy a second ghost.

It would be very usefull to display, next to the upgrade button which is the limiting ressource.

Ah ! Just as I had finally started my first game, you released the new version ! Reloading from scratch now...

I've been checking this game for updates at a slightly embarrassing level of frequency. Quite interested to see what has changed in the update.

Have you found anything yet? I was hoping for a save feature, about to play it agai

The game has saved fine for me even before the update. Maybe it's broken for some people or something? In any case, there's some quality of life tweaks and a new energy ability that's very good. I haven't gotten to the dark mana stuff yet, though.

The game has never saved for me, if I restart my laptop the game resets which is why I don't play it ofte

This game is really great! Please don't stop developing just because of Kong. I love this game a LOT. Can it have an "Export save data" by the way?

A save game feature would be nice. Other than that I think you really have something good here. Looking forward to future updates.

That is the only reason I stopped, my progress won't transfer so I'm waiting a bit to play again

It uses similar mechanics, but I'd say it's an improvement. Swarm Sim becomes such a dull grind eventually.

I want to say that I am gradually working on the game! Since initially I wasn't sure if I would continue, I think it's worth mentioning. Thank you all for your feedback.

Keep going echa, it has a certain charm, I've come back for about a week now for steady progress. :)

If I had one wish though, it would be being able to switch to scientific notation (e.g. 1e27) or not needing to scroll the producers, both equally irking me.

Yeah, I've already did that! Not sure when i upload a new version though 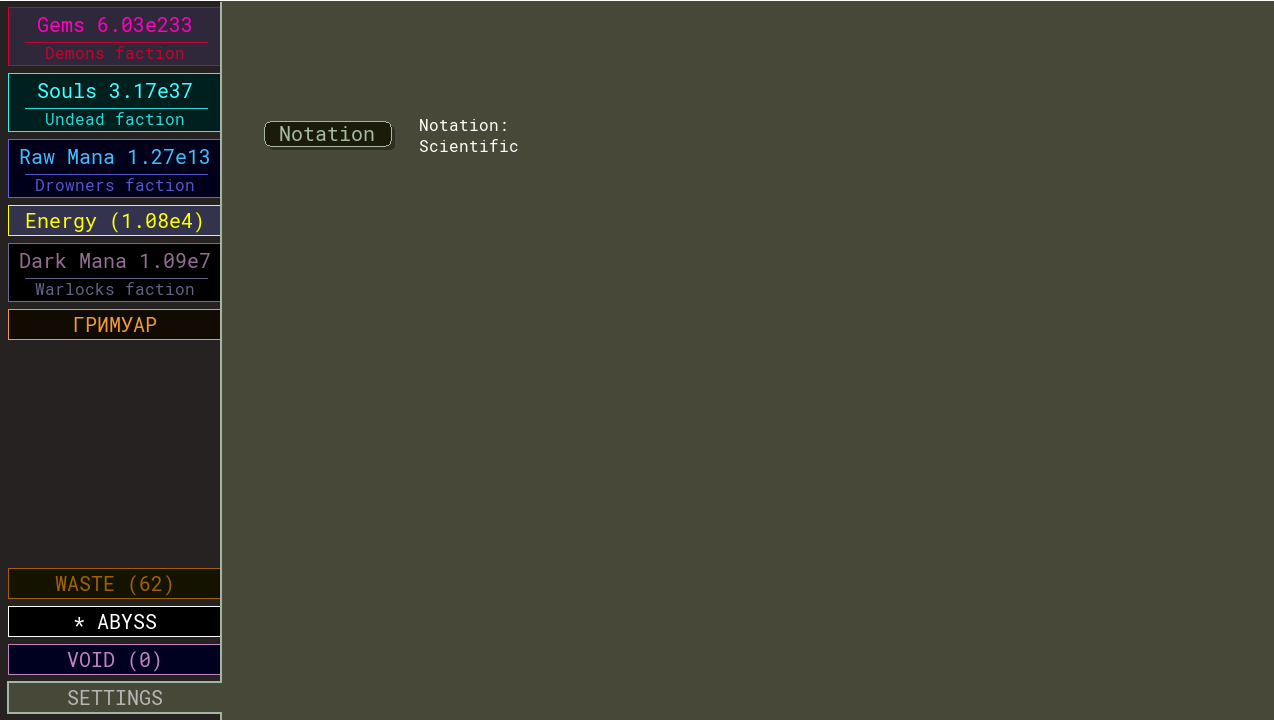 ive seen new games start apearing on Kong again, so u might try putting it on there again, chats are still dead tho

This game got me for DAYS :ooo

As for mechanics, the Waste resource is a pain -- especially since it's not clear that Energy gives you some until you actually unlock it. But even very late into the game, Waste is always the blocking material, and since there's no way to upgrade your ability to get it but the cost of using it increases, it's very frustrating to scale later game.

And one more bit of advice, change your numbers display. The early-game displays are extremely confusing (SpQi? QaTg?), so it's hard to tell what the numbers are. Later when you switch to E notation, it's much better, so why not just start with that, at least past T which is the last commonly-used notation.

i accidentally softlocked by doing a soul sacrifice and using up all my soul on imps ;-;

I will have to think about this moment.

Love the game, can't wait for the rest of it to be developed.  I do wish I had options other than 1 and ALL.

Thank you. Thank you! I plan to continue developing the game.

just port it to steam my dude :) steam community is getting decently big, i dont know whats going on with Kongregate atm     :(.

this is fun! the interplay of different factions is enjoyable to figure out efficient balances for.

unfortunately, I've accidentally softlocked my progress: I did a gems and souls sacrifice at the same time, spent all my souls on Imp A, and then realized I couldn't buy a Ghost A without souls... I think if sacrifices gave you one free unit of tier A, that would solve the issue!

Yeah, now I see that it is a problem.

Chalk up another vote for continued development. Even as a bare prototype, this is eminently playable.

If you make a patreon, I'll pay you $5/month to continue working on this.

Very nice game , found this from Broken Mouse Convention , I think you should continue this game , maybe add it on steam i think people will download , I mean I would.

When do you recon that the content reaches its end?

I've gotten to Imp H and realized that the portraits for the imps are being reused. Does this mean there is no change in mechanics - or and end -  after this point? Just curious; I'm still having a lot of fun.

Everything I've played so far has been really great. The unfolding mechanics keep the game fresh, and progress is made up quickly after mini-prestiges so that they feel worth it, rather than a way to drag out content.

This is a really special game and it's a shame that Kongregate isn't accepting any more because I'm sure many people would enjoy it as well!

Been playing for a few hours now, really loving the game! There seems to be quite a bit of depth already, so still lots of mechanics to discover c: